Well, almost graduated. Grades aren’t released for another few days, but I’m pretty sure I didn’t fail any classes this semester. (Please be merciful, professors)

Turning in my last assignment was a bit of a shock. Immediately after, I was still in student mode. My friend asked me:

It took a few days to sink in. I couldn’t shake the anxiety. How could I not have deadlines?! Projects?! Work that will cut into my sleep schedule and make me consume even more coffee?!

Though, to be fair, that also cut into my sleep as well. 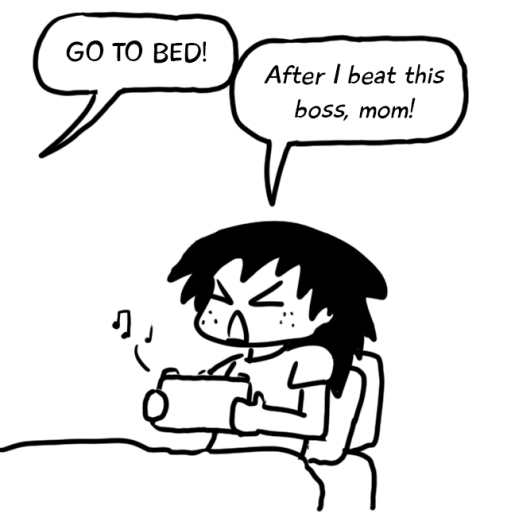 So now I’m home for the holidays! I’m taking some time off before starting work full-time in February. Current plans? Sleeping, trying to wean myself off caffeine, and reminding myself that, by some miracle, I have a master’s degree.

Because let me tell you, I sure don’t feel like a “master” of anything yet.

I should be more chill. As my professor reminded me…

Looks like the learning doesn’t end even when you’re out of school! Except this time, I don’t have to bury myself in debt to do so. In fact, I’ll even get paid!

When I entered college three years ago, I took a free practice MCAT offered by Kaplan.

Three years later, I took a practice MCAT again. This time, I was trying for real. I had been in college for three years already, so I had to do better– right?

Apparently not. After three years of schooling, my score raised only by a nominal point.

Unlike during my freshman year, where I could just brush it off… 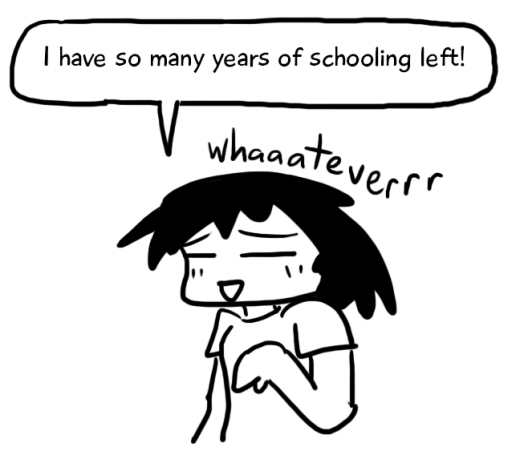 …I can’t really ignore it now. 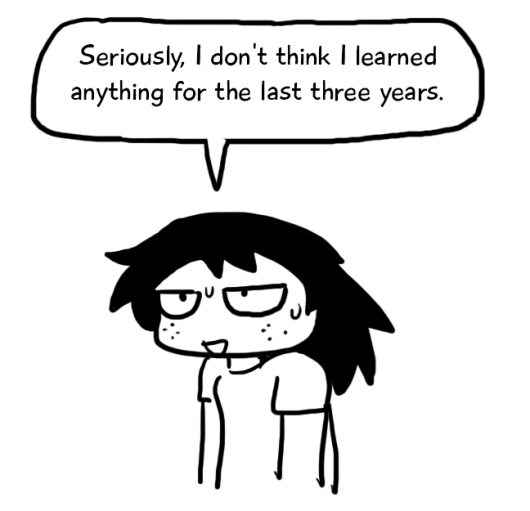 Since I’m graduating college in a year, I actually have to think about my future now. Part of this has become studying for the MCAT, also known as the Medical College Admission Test. Among all of the grad school exams, the MCAT is particularly notorious. It is long, hard, demands a great deal of memorized knowledge, and is designed to weed out the weak.

The weak, including me.

So I registered for one of Kaplan’s online MCAT courses.

I knew that I would have to study hard for this exam. It covers organic chemistry, general chemistry, biology, physics, and verbal reasoning– all subjects that I have struggled with in the past. But I was still a little shocked when I received my Kaplan review books in the mail.

I was even more shocked when I started to read the material.

As it turns out, I haven’t learned 50% of the content I’m supposed to know for the MCAT, ever. The other 50% I studied years ago. In between my full-time internship and increasingly time-consuming half-marathon training, I continued to study.

My first MCAT class rolled around.

Try as I might, I could not keep up.

But as life got in the way, even the weekends failed me.

Falling so behind started to get to me.

There was only one thing to do.

So now, I’ve bought myself a little more time (literally, as changing your MCAT test date costs $65) to prep for this exam. In other words, I’ve delayed my inevitable collapse until October.

Maybe I should go into business instead.

I know it’s lame. But dang. Classes are seriously getting to me this semester, more than ever before. I don’t even know why– my classes shouldn’t be this bad. But I’m dying nonetheless.